There is no such thing as a salmon season 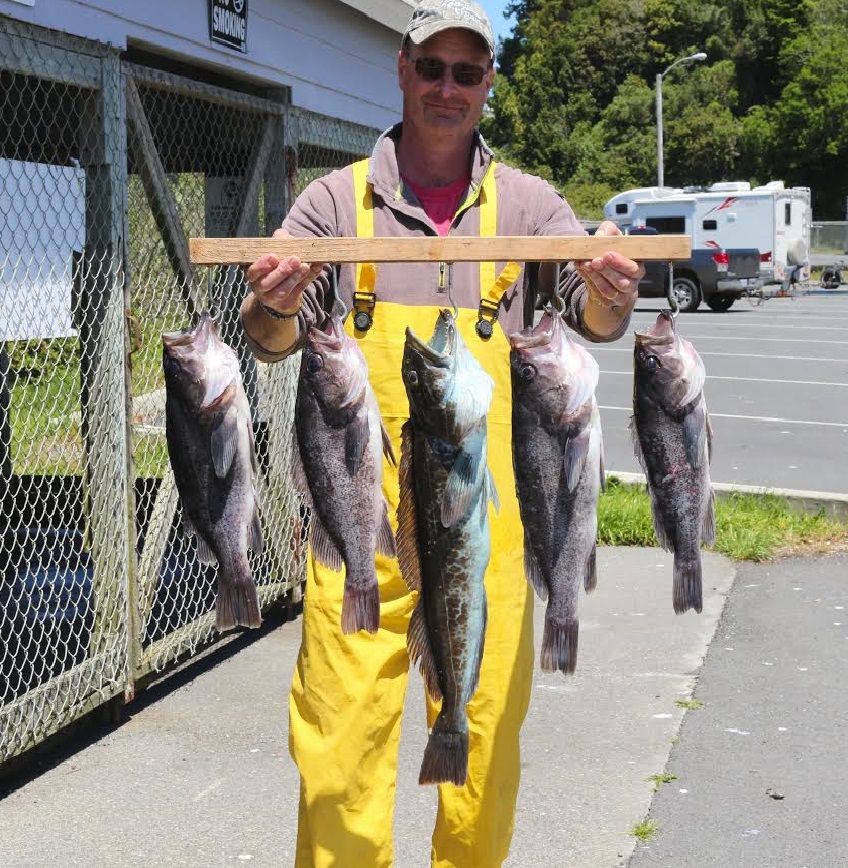 Doug Massingill from Hood River, Oregon travelled down to Brookings to catch some large black rockfish and lingcod. Photo by Larry Ellis.

I remember when folks used to make statements like, "So when is the salmon season opening?" Or, "Will there be a salmon season this year?"

The aforementioned statements get uttered frequently by people who think that there is only one solitary salmon season for the states or Washington, Oregon and California,

And I must admit that at one time in my life when I didn't know any better, I probably thought the very same thing.  I mean, when you really think about it, didn't most of us think those very same thoughts?

It took me a while before I finally "got it", so to speak, but now that I've got it, I wish to pass it onto you.

Folks, there is no such thing as one solitary salmon season.  Depending where you live, there can be literally a hundred or more different salmon seasons, with many seasons coexisting at the same time.

Emphasis on the word "ocean".

The KMZ is quite a broad expanse of the ocean that extends from Horse Mountain near Eureka, California and expands north to Humbug Mountain, which is about 6 miles south of Port Orford, Oregon.

So if you want to catch a salmon in the ocean, you simply have to follow the rules in the various salmon seasons north and south of the Klamath Management Zone.

But most importantly, there will be numerous salmon season seasons available throughout the year in most of Oregon's rivers.

Emphasis on the word "rivers".

One of those rivers which I have personally fished for 35 years, is the lower Rogue River, and the action for spring Chinook, also known as springers, is a happening activity right now, with the action expected to pick up as the weeks go by.

"We're catching springers which at this point is heavily weighted toward wild springers," said Larry Cody from the Rogue Outdoor Store on Thursday. "The folks who know what they're doing are catching fish, but the constant refrain is that they're tired of having to release them."

At this point in time, all wild spring Chinook must be released.  Only hatchery salmon with a healed adipose fin clip may be kept.

But start counting backward.  In only 12 days on June 1, both wild and hatchery springers may be kept, and the Rogue is noted for getting a late run of spring Chinook and an early run of fall Chinook.

Most of the springers are being caught by boaters anchoring up on a current seam near the bank.  Most fishermen are setting out straight anchovies, anchovies used on a spinnerbait/anchovy rig, or a Blackjack-colored Brad's Cut Plug with oil-scented tuna jammed in the bait compartment, and they are setting their rods firmly in a rod holder.  Almost all anglers are using a wire spreader with between 3 and 8 ounces of lead.

Drop into the Rogue Outdoor Store and Cody will show you how to rig up.

Rogue River anglers are also catching their fair share of redtail surfperch and surprisingly, they're catching a lot of the surfperch at the Rogue River south jetty spit.

"With the high flows in the river, I've been telling people not to waste their time fishing the sand spit, but they're catching them right, left and sideways," emphasizes Cody. "They're all nice-size fish and up to this point they've been all chuck full of sand crabs."

Out of the Port of Brookings Harbor, anglers casting herring, imitation plastics of various natures, and leadfish are catching a nice-size grade of rockfish.  The majority of the Sebastes genus have been black rockfish, but there have also been reports of China, quillback, canary and vermilion rockfish caught as well.  In addition, large lingcod have been meeting the sharpened ends of electric fillet knives.

Rockfish and Lingcod back on the bite 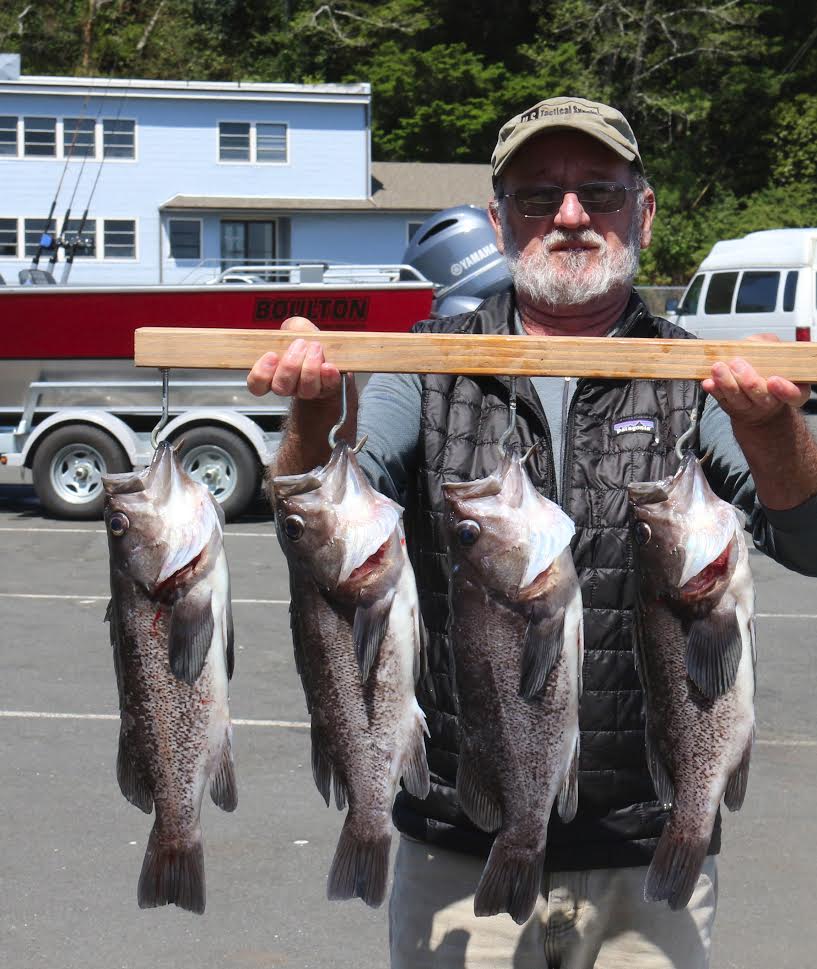 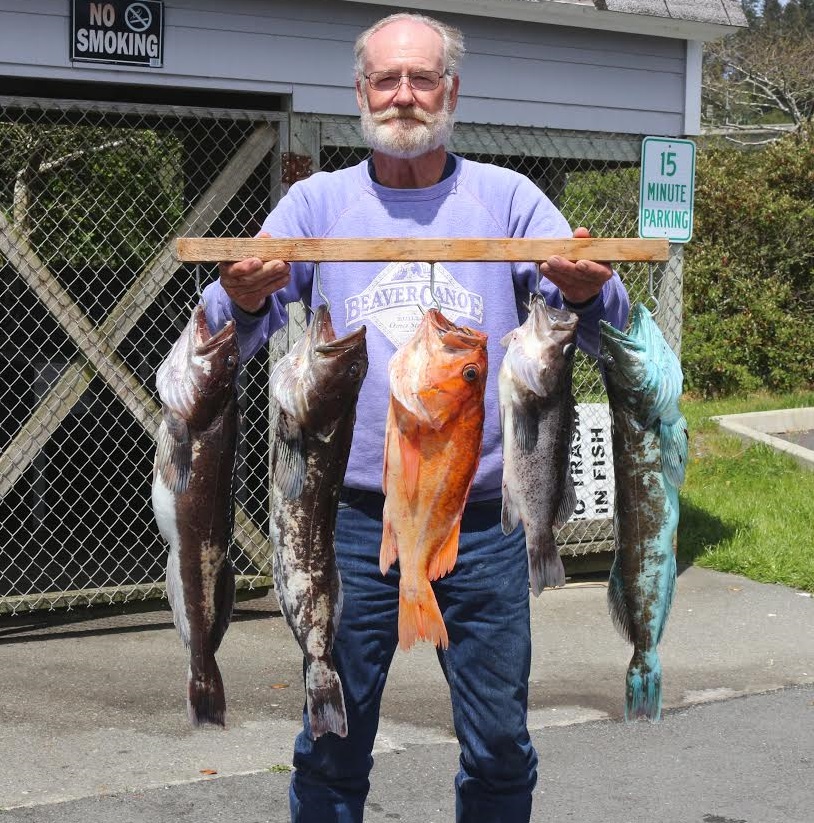