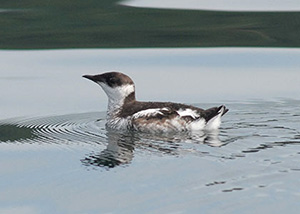 The Oregon Department of Fish and Wildlife released a draft Status Review of the Marbled Murrelet for public review and comment.

The status review is in response to a petition submitted to the Oregon Fish and Wildlife Commission by several conservation groups. The petitioners recommend the seabird be reclassified from threatened to endangered, or “uplisted,” under the Oregon Endangered Species Act.

Comments on the draft status review are invited through November 9, 2017.

Written comments can be submitted by email to [email protected] or by mail to ODFW, Marbled Murrelet, 4034 Fairview Industrial Drive SE, Salem, OR 97302. Comments submitted, including identifying information such as names, affiliations, and email addresses, will become part of the public record.

ODFW will produce a final status report following completion of the public and peer review processes. Staff tentatively plan to present that final document at the February 2018 Commission meeting.

Recreational bottomfish to reopen in Oregon for some species Oct. 1

9-28-2017
Recreational fishing for bottomfish for some species will reopen Oct. 1 outside the 40 fathom line for anglers with “long-leader” gear.  Several species...... Read More