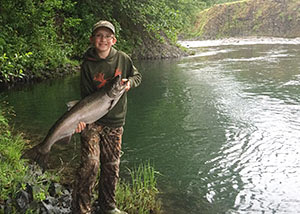 ODFW has set regulations for the popular spring Chinook fisheries on the Deschutes and Hood rivers, with both fisheries set to open on April 15.

Last year, there was no season on the Deschutes due to poor returns of both hatchery and wild fish. This year, fish managers are predicting as many as 7,600 hatchery fish will return to the Deschutes, which is substantially larger than last year. But with numbers of wild fish returning predicted to remain extremely low, a reduced bag limit and conservative regulations will be in place to protect their numbers.

“If the run comes back as predicted, hatchery Chinook salmon fishing on the Deschutes should be good,” said Rod French, ODFW district fish biologist in The Dalles. “The Deschutes River fishery below Sherars Falls is extremely popular because it offers a great chance to catch a Columbia River spring Chinook from the bank.” In recent years, as many as 10,000 anglers a year have participated in the fishery.

According to French, the Hood River offers another good opportunity to catch a spring Chinook from the bank but in conditions that are much less crowded than on the Deschutes.

For the latest regulations and recreation report for the Central Fishing Zone visit myodfw.com/recreation-report/fishing-report/central-zone