Mark Barry from Las Vegas, Nevada was fishing with halibut aficionado Brian Gagnon last week when he caught this 50-pound Pacific halibut out of the Port of Brookings Harbor. Photo by Larry Ellis

Fall is in the air, and Chinook in southern Oregon bays are falling for the spinnerbait/anchovy rig.

If you know how to rig up a spinnerbait/anchovy rig properly, the chances are likely that you could be waltzing with a Star Chinook from the Chetco or Rogue bays.

The Rogue bay, although it has lost some of its fire from recent weeks, is still managing to kick out between 1- to 2-fish limits for dedicated guides' customers, and a few anglers fishing the Chetco bay are also coercing the occasional Chinook to bend the rod double as well.

The spinnerbait/anchovy rig is the number 1 trolled rig in these two bays. You can't get bit without one. So what is this 'spinnerbait/anchovy' rig anyway?  The name of the lure seems a bit misleading. First of all, it is not a bass type of spinnerbait. It ain't even close to looking like one of those critters.

As the story goes, the salmon spinnerbait was first accidentally used by salmon fishermen who were trolling the Rogue bay who were basically using a 2-hook sliding mooching rig.

They also figured out how to get the line leading to the back hook to go through the belly of the baitfish, thereby remaining clandestinely invisible to a nearby fish.

The company Luhr Jensen marketed this ingenious device, calling it the Rogue Bait Rig. To this day, the spinnerbait/anchovy setup is still referred to as a Rogue Bait Rig by about half the Rogue bay trollers. The other half just call them spinnerbaits.

So, don't troll one of your favorite chartreuse, bushy-skirted bass spinnerbaits in the Rogue or Chetco bays, because the likelihood is that it won't get touched by a salmon.  Take one of those setups to the Umpqua because that system contains plenty of smallmouth bass that will eagerly inhale those rigs.

Anyway, for the purpose of this article, and for simplicity, I will be referring to spinnerbait/anchovy rigs as 'spinnerbaits'.

So how did those first spinnerbait fishermen in the Rogue bay figure out how to get the line leading to the back loop to go through the center of the baitfish? They used a 10-inch wire coat hanger, sharpened one end to a point and filed a little notch into the coat hanger about an inch away from the point.

By inserting a number 2 treble hook through the loop, they were good to go.

You can actually make one of these bait threaders yourself, but finding a wire coat hanger in this day and age is like pulling teeth. But, if you are so inclined, you can buy a brass rod that will suit the same purpose.  But the local tackle stores only sell these bait threaders for a couple bucks.

You can also buy home-tied spinnerbait rigs for a nominal fee at Lex's Landing, Jot's Resort and the Rogue Outdoor Store, all three stores being in Gold Beach.

The professional guides who tie these things up will also use a number 1 octopus hook for the top sliding hook.

Why such a small hook for the upper hook, you might be asking yourself? The answer is that on a spinnerbait rig, the upper hook is not used to hook the salmon at all.  It is used solely for adjusting the tension between the top and bottom hooks, so that the anchovy is spinning tight and fast, just like a drillbit.

Rigging up a spinnerbait can be summed up in six easy steps.

First, make sure that you have about 8 inches of slack between the upper and bottom hook.

Second, using your bait threader, drag the loop for the back hook through the middle of the baitfish so the loop comes out of the baitfish's anus.  At this stage, I will insert the treble hook of my choice into the loop, so that I won't accidentally lose the loop inside the baitfish.

Fourth, while pinching the top hook between two fingers of one hand, slowly pull on the upper part of the leader with your other hand, and insert the shank of the treble hook into the baitfish's anus.

Fifth, insert one of the hook points of the treble hook into the side of the anchovy, just behind the exit hole of the baitfish.  You will want to feel for the baitfish's spine.  When you feel the resistance of the spine - stop pushing!

Sixth, you can now adjust the tension between the top and bottom hook, so that the anchovy has a slight bend.  For the best results, make the baitfish arch from top to bottom, just like a porpoise, not side-to-side.

Now test the spin of the anchovy while at trolling speed.  When your anchovy is spinning tight, like a drill bit, you've got a spinnerbait that no self-respecting salmon can resist.

Anchovies are the number one baitfish used in the Rogue and Chetco bays - period, exclamation mark, end of story!

So how has the fishing actually been in the last several day in the Rogue bay? On a scale of 1 through 10, I would give it an 8.

According to Jim Carey from the Rogue Outdoor Store, the fishing has tapered slightly since last Wednesday's off-the-chart bite, but it has been still good enough to keep fishermen definitely enthused.

"I'm averaging about 3 fish a day," says noted guide John Anderson from Memory Makers Rogue River Guide Service on Thursday. "We're trying to get one fish per client. It's been an afternoon bite.  But there's also been a morning bite.  Quite a few of the guides were off the water by 10 or 11. The fishing has been consistently steady."

And according to Carey, the summer steelhead are definitely plowing into the lower part of the river clear up to Agness, where anglers are nabbing their half-pounders from the bank by throwing night crawlers, Panther Martins or Mepps spinners.

I have also seen about a half dozen very nice and robust kings being caught in the Chetco bay by anglers who are trolling spinnerbait rigs.

The lingcod bite has suddenly turned red-hot for anglers fishing out of the Port of Brookings Harbor.  A variety of rockfish have also been biting with enthusiasm at all the local reefs, with the number-one bait for the lings and rockies being your favorite plastic jerk bait.

Several respectable-size Pacific halibut have also met the sweet spot of an angler's Louisville Slugger.  We're talking flatties in the 40- to 50-pound range.

Crabbing for Dungeness has also been quite good for those crabbing from 40- to 70-feet deep.

All in all, it has been a very respectable week those fishing for their favorite fish or crab species. 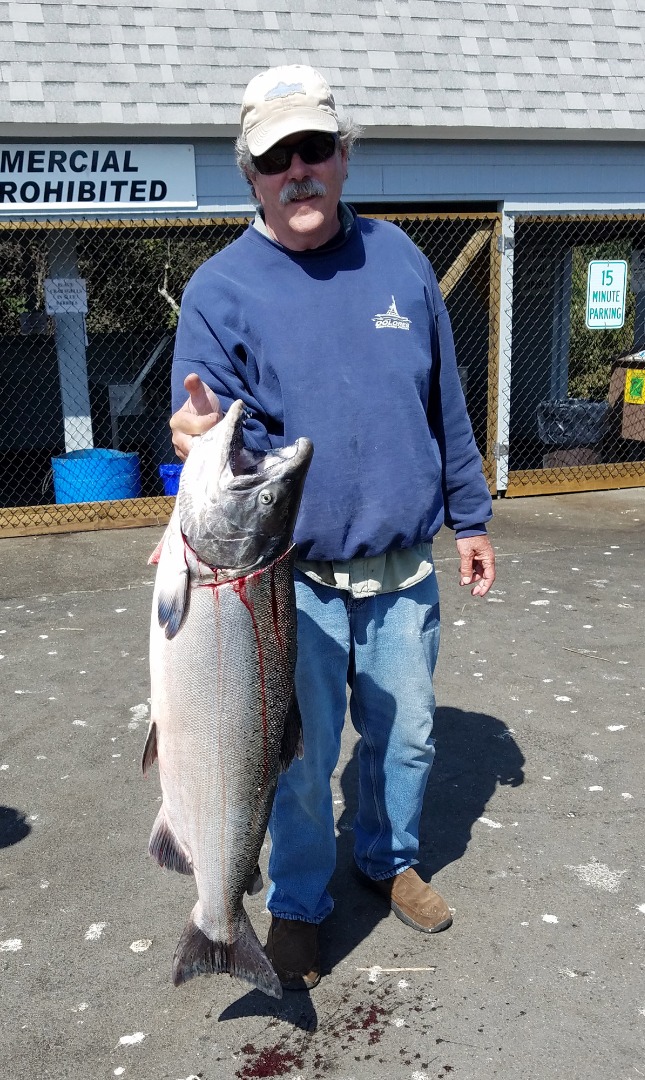 Chinook, like this near-30 pounder have been attacking the spinnerbait/anchovy rig in the Chetco bay, this one caught by Mark Gasich of Brookings, Oregon. Photo by Larry Ellis 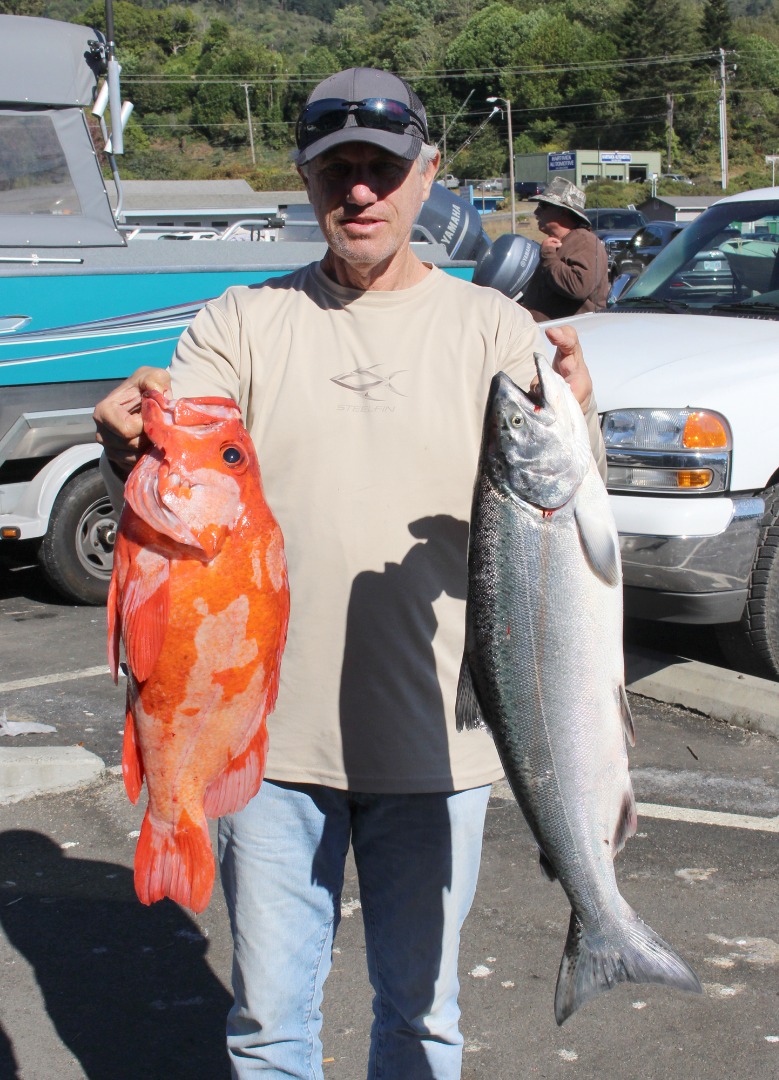 Alan Smith from Newport Beach, California was fishing with Mark Gasich of Brookings, Oregon when he caught this 15-pound Chinook in the Rogue bay last week, after which the pair limited out on lingcod and rockfish at the Rogue Reef, including this large vermilion rockfish. Photo by Larry Ellis 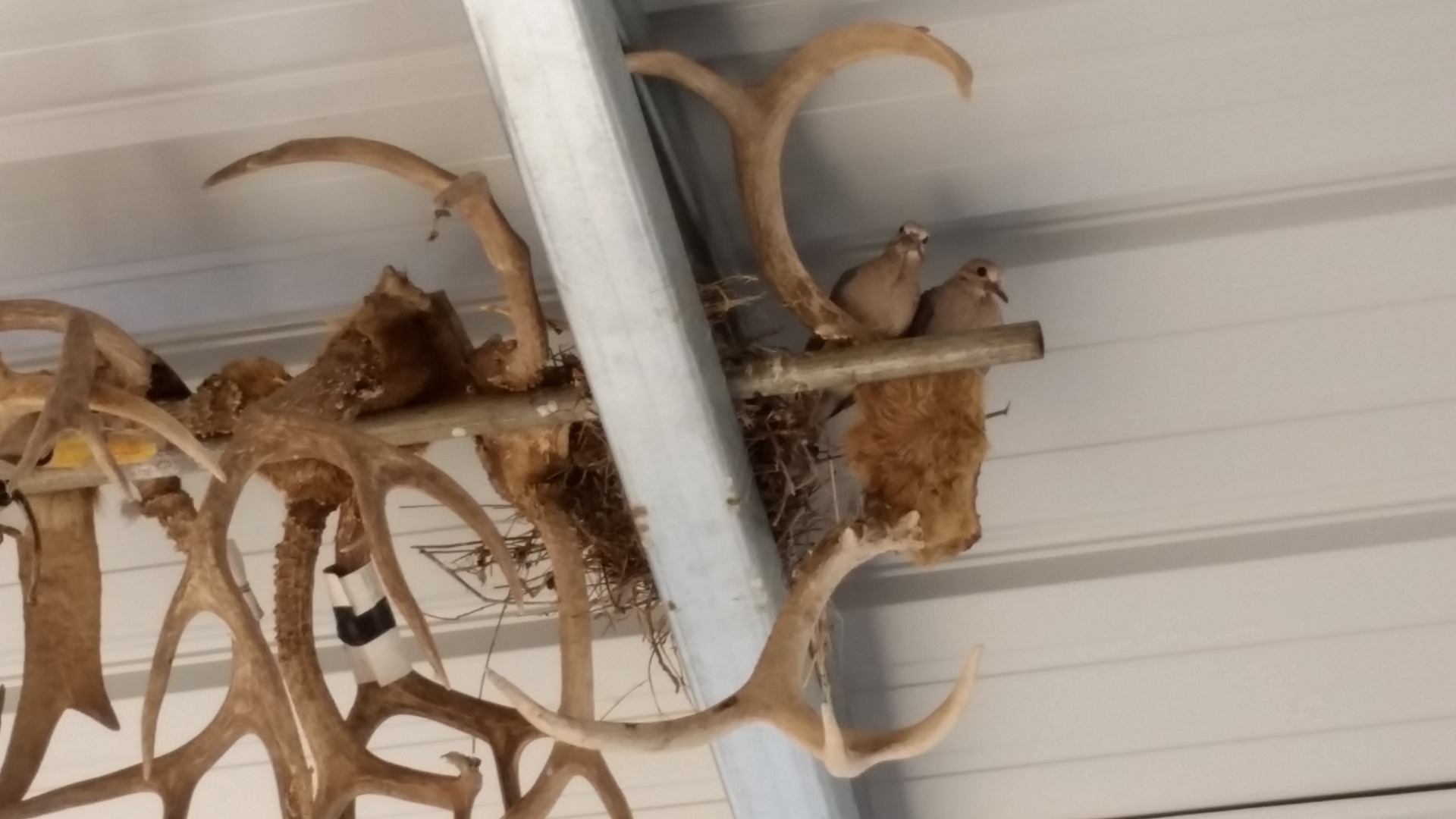 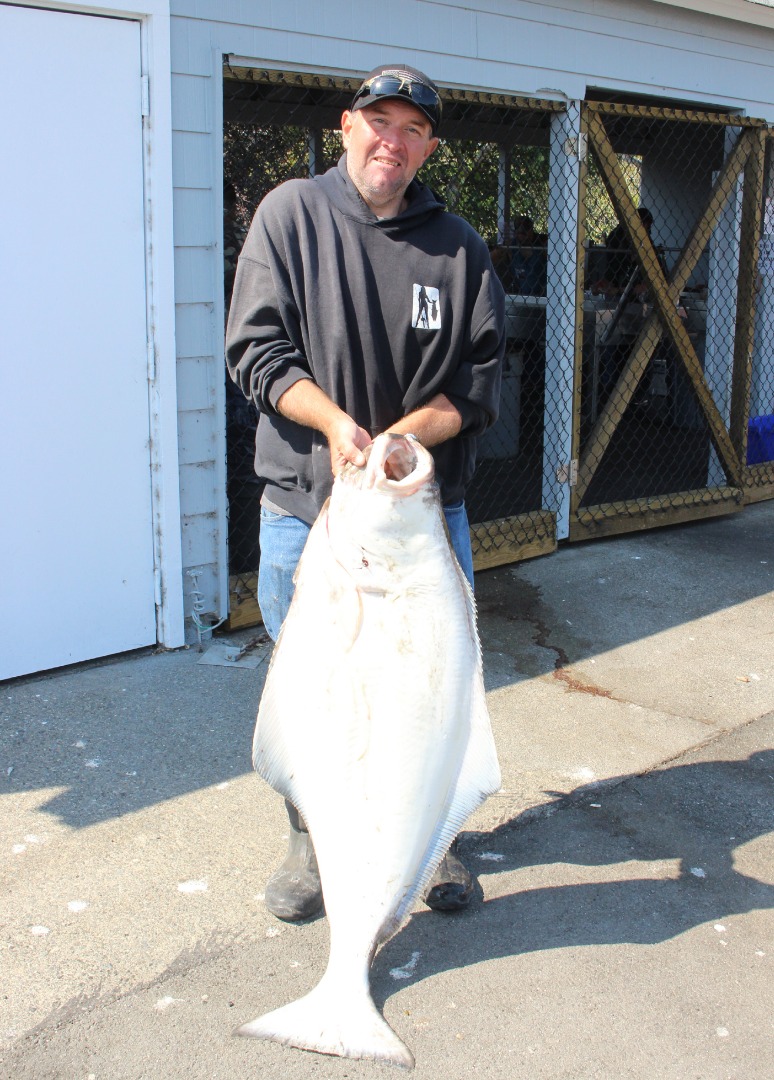 9-7-2018
Salmon fishing in most Oregon rivers and estuaries has been somewhat lackluster as far as August and September goes.  At...... Read More