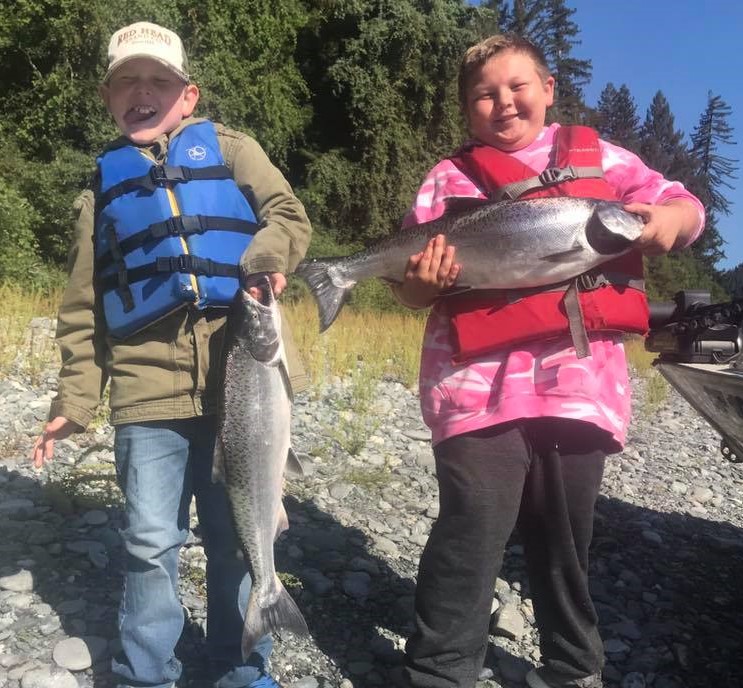 Mike Walton, left, and Niko Mirante from Tracy hold a couple of salmon they landed on the Klamath River back on Sept. 9. Fishing remains red-hot on the Klamath, with fresh kings being caught throughout the river. Photo courtesy of Tony Sepulveda/Green Water Fishing Adventures

In case you haven’t heard, the Klamath River is chocked full of salmon. And it has been for quite a few weeks now. What makes this story remarkable is this it's coming on the heels of the river being completely closed to fishing after Aug.15 last year due to the projected low returns. The CDFW predicted roughly 93,500 fall-run adults were set to return this year, and it appears they may have been right. On average, 122,000 adult fall-run kings return to spawn. In 2017, only 18,410 were predicted, which was the lowest on record. Turns out 31,838 actually returned, which provided some hope for this year.

The first sign that we knew this could potentially be a good year was back in June. Towards the end of that month the estuary was loaded with kings, likely a mixture of springers and early fall-run salmon. The fishing was as good as I’ve ever seen for about six weeks straight. Around the middle of August the fall run started to push upriver, and that’s when the real party started. And it’s been happening ever since.

I’m sure there’s all kinds of scientific reasons for the season we’re having, but a couple stand out. First, the number of jacks that returned to the Klamath last year was sizeable, 21,903 to be exact. History tells us when we have a good return of jacks, the following year should see a healthy return of three year-olds. And that’s exactly what we’re seeing. The condition and placement of the river mouth was much improved this year. It has started to move back towards the north and was much shorter. This allowed for the channel to remain deep and not sand over. Another factor that could have played a part is the extra water coming down from the Trinity. Flows went from 450 to 700 cfs back in July due to emergency releases out of Lewiston due to the Carr fire. Flows were just recently adjusted back down to 450. Whatever the reasons, the Klamath has made a tremendous recovery. And all the signs are pointing towards some epic fishing in the coming years.

Klamath/Trinity quotas
As a reminder, the fall Chinook quota was met on the lower Klamath River on Wednesday, Sept. 12. Fishing is still open from the Hwy. 96 bridge in Weitchpec to the estuary, with the daily bag limit being two jacks (Chinook less than 22 inches) Fishing is closed from 100 yards around the river mouth  (spit area). The quota on the Upper Klamath should remain open until Oct. 10. Closing dates for the Trinity have yet to be determined. Anglers may keep track of the status of open and closed sections of the Klamath and Trinity rivers by calling 800-564-6479.

Weekend marine forecast
Winds and seas will continue to diminish this week, though a southerly swell will gradually build this weekend. Friday’s forecast is for winds out of the S up to 5 knots, with NW swells 4 feet at 8 seconds. Winds will blow out of the S up to 5 knots on Saturday, with SW swells 2 feet at 4 seconds and NW 3 feet at 8 seconds. Sunday is looking similar, with winds out of the S 5 to 10 knots and S swells 3 feet at 4 seconds and N 2 feet at 8 seconds. For an up-to-date weather forecast, visit www.weather.gov/eureka/. To monitor the latest Humboldt bar conditions, visit www.wrh.noaa.gov/eka/swan. You can also call the National Weather Service at 707-443-7062 or the office on Woodley Island at 707-443-6484.

With salmon and halibut both closed, rockfish at the Cape has taken center stage. Tim Klassen of Reel Steel Sport Fishing has ventured down that way a couple days this week and reports that the fishing has been excellent, especially the ling cod. “On Saturday, we probably had the best ling cod bite I’ve ever seen. It was wide open and we kept limits of fish ranging from 15 to 20 pounds and released plenty more. The rockfish bit well too, but not quite as good. We’re still catching a wide variety and landing limits or very close to it.” Klassen added. Other than rockfish, tuna is the other option this week. Boats were planning on running Thursday and Friday if the weather holds. As of Tuesday, the warm blue water was straight out of Eureka roughly 40 miles. Humboldttuna.com is a great resource if you’re planning on making the run.

Crescent City
Not much happening out of Crescent City, with most of the effort coming from a few of the locals, reports Chris Hegne’s of Englund Marine. “We did talk to some guys who were out over the weekend and it sounded like the rockfish bite was red-hot,” Hegnes added.

Shelter Cove
With salmon fishing slow, we’ve spent most of our time rock fishing, reports Captain Jake Mitchell of Sea Hawk Sport Fishing. He said, “The fishing has been fantastic. The ling cod really went on the chew and we boated easy limits. We spent most of our time fishing the Hat. With warm water within reach and the weather coming down, we’ll be chasing tuna for the next couple days.”

Brookings
Rough weather made ocean fishing tough over the weekend and early this week out of Brookings, reports Andy Martin of Brookings Fishing Charters. “Winds are expected to die down later this week. Crabbing has been very good. Salmon are being caught daily at the mouth of the Chetco. Some days, more than two dozen fish are caught by the 20 or so boats trolling the estuary. Good early fishing generally means a big run during peak season in October and early November,” added Martin.

Salmon fishing remains wide-open on the lower Klamath. There’s fish in just about every hole and riffle from the Glen all the way up. There’s still a good mix of adults and jacks, as well as some adult steelhead around. As a reminder, salmon larger than 22 inches must be released from the Hwy. 96 Bridge at Weitchpec downriver to the estuary . Please remember that during closures to the take of adult salmon, it’s unlawful to remove any adult Chinook Salmon from the water by any means.

Lower Rogue
The Rogue Bay has been good one day and slow the next, according to Martin. He said, “On the good days, most boats are getting multiple fish. Lots of jacks showed up last week. Tuesday was especially good on the Rogue Bay.”

Trinity
There’s quite a few salmon in the river, and both the bank anglers and boats are doing well, reports Tim Brady of Weaverville’s Trinity Outdoors. He said, “Most of the boats are fishing from Lewiston to the North Fork, and doing well on both salmon and steelhead, The majority of the bankies are fishing from the North Fork to Cedar Flat. It sounds like they’re doing pretty well tossing spinners. The fish that are coming in the river now are in good shape, the meat is nice and red.”

Catch em’ while you can – halibut season closes after Friday 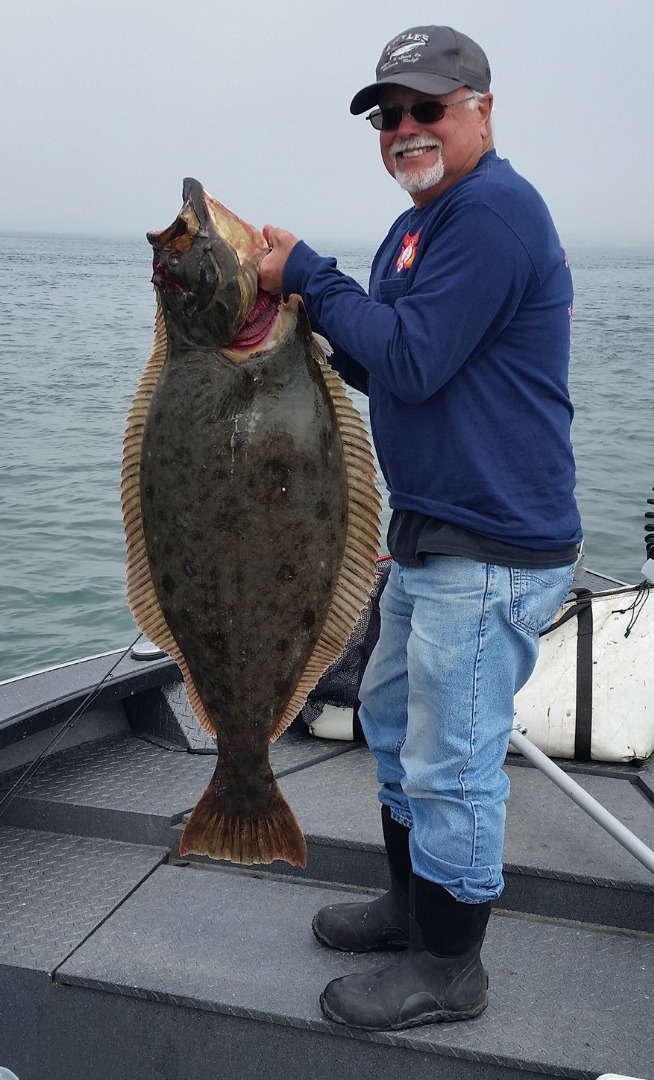 9-20-2018
North Coast offshore anglers will have one less option come Saturday morning as the California Department of Fish and Wildlife...... Read More

Adult quota met, jacks only on the Lower Klamath 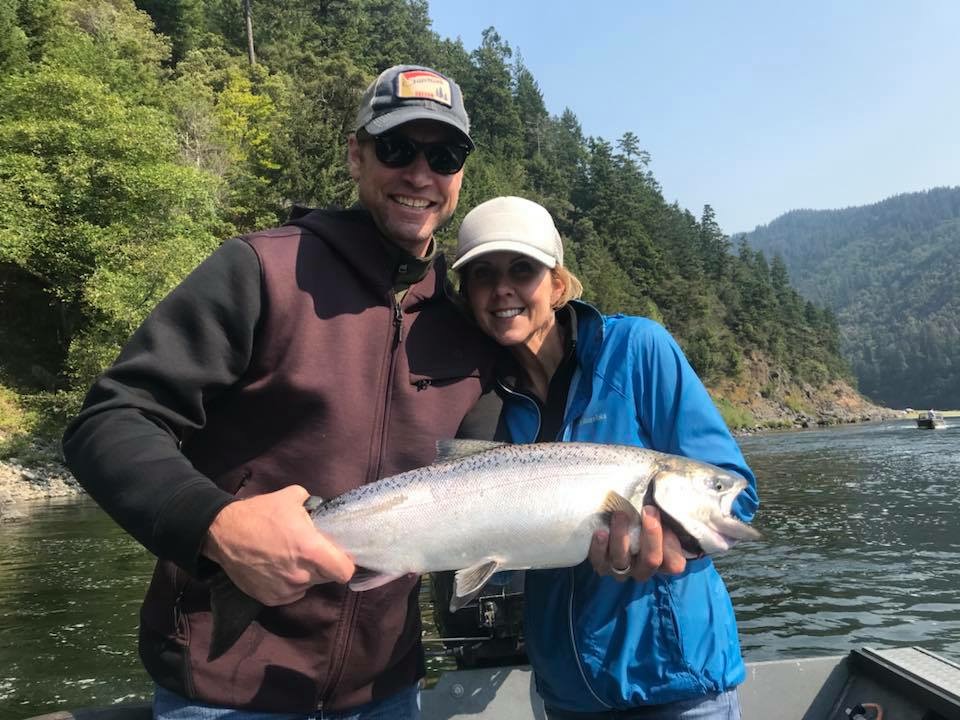 9-13-2018
The California Department of Fish and Wildlife (CDFW) announced on Wednesday that the adult fall Chinook quota has been met...... Read More