Chetco Fall Kings on The Decline 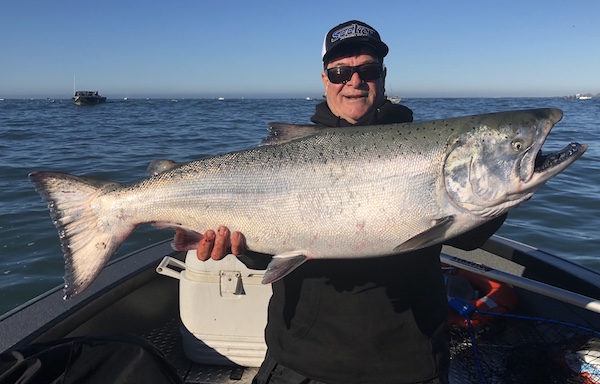 Paul Bocher of Reedsport landed this hefty fall Chinook salmon while fishing the Chetco “Bubble” fishery in 2018. The ODFW is proposing a one-year temporary closure to the fishery in 2019 due to extremely low preseason forecasts of returning wild kings to the Chetco this fall.
Photo Credit: Photo courtesy of Andy Martin/ Brookings Fishing Charters.

Fall Chinook salmon returning to the Chetco are on the decline, and the Oregon Department of Fish and Wildlife is proposing some pretty drastic cutbacks. In a press release issued on Monday, the ODFW is proposing temporary harvest limits and closures for coastal wild fall chinook fisheries due to low escapement in 2018 and poor forecasts for this year. Preseason forecasts show fewer than 1,300 wild spawning Chinook will return to the Chetco, which is below the minimum needed to keep the population from declining further. ODFW is proposing a closure on the Chetco upstream of mile 2.2 at least until November and reduce the limit from one a day and five a year to one a day and no more than two a year. The closed section of the Chetco would open only after significant rains would allow the salmon to migrate freely upstream. ODFW is also looking at curtailing the extremely popular “Bubble” fishery at the mouths of the Chetco and Elk Rivers. These fisheries only occur when there’s an abundance of excess kings for anglers to harvest. These proposals are temporary, one-year reductions put in place to lessen the number of chinook anglers keep and increase the number that spawn in the fall. No changes are proposed for the Rogue or Umpqua rivers.

The public is invited to give input on the temporary proposals at meetings hosted in North Bend, Port Orford and Brookings. Proposed temporary regulation changes provide angling opportunity while cutting back harvest and increasing spawning escapement of wild fall chinook. Public input helps to balance the two objectives and help fishery managers should additional regulations be needed during the season. The meeting in Brookings will be held June 5 from 6 p.m. – 7:30 p.m. at the Brookings, Chetco Community Public Library, 405 Alder Street. For more information, visit https://www.dfw.state.or.us/news/2019/05_May/051319.asp

Shelter Cove sport salmon season set to reopen Saturday
The sport salmon fishery will reopen this Saturday, May 18 from Horse Mountain, which includes Shelter Cove and Fort Bragg, south to Pigeon Point. The season will run through Oct. 31. The season from Pigeon Point to the US/Mexico border has remained open, but will close on Aug. 28. The area from the CA/OR border to Horse Mtn., which includes Del Norte and Humboldt Counties, will open on May 25 and run through Sept. 2. For more info on the sport salmon season, click here.

Abalone Management meeting scheduled for May 22
This is the first public project team meeting held regarding managing the red abalone fishery. Discussions will include management strategies and managed/restricted access fishery options. The meeting will be held in Santa Rosa at the Justice Joseph A. Rattigan Building, Room 410 50 D St (at First St.), from 9:00 a.m. to 5:00 p.m. Registration will begin at 8:30 a.m. A call-in option will be available in “listen-only” mode. For more information click here.

Pacific halibut quota update
The CDFW has projected 3,944 net pounds of Pacific Halibut has been harvested through May 12. To view the latest catch projection information, visit here.

Weekend marine forecast
For coastal waters from Pt. St. George to Cape Mendocino out 10 nautical miles, the marine forecast doesn’t look very fishable this weekend. Friday, the forecast is calling for winds out of the S 5 to 10 knots with waves W 6 feet at 8 seconds and SW 2 feet at 15 seconds. The swells are a little bigger and the wind will increase slightly beginning on Saturday. Winds will be out of the S 5 to 15 knots and waves will be out of the W 6 feet at 7 seconds and NW 4 feet at 13 seconds. Sunday doesn’t look good at all, with W winds 5 to 10 knots and W waves 11 feet at 13 seconds. These conditions can and will change. For an up-to-date weather forecast, visit www.weather.gov/eureka/ or https://www.windy.com. To monitor the latest Humboldt bar conditions, visit www.wrh.noaa.gov/eka/swan. You can also call the National Weather Service at (707) 443-7062 or the office on Woodley Island at (707) 443-6484.

Changing ocean conditions and a little unsettled weather almost always leads to an inconsistent bite. And that’s what the boats fishing out of Eureka are facing according to Tim Klassen of Reel Steel Sport Fishing. “The boats fishing for halibut are having tough time finding a consistent area that’s holding fish,” said Klassen. “You find a few one day, and you head to the same location the next day and everything has changed. That’s really been the case since the opener. There are some around however, and boats are catching a few each day. The best bite has been straight out on the 48-line to 250 to 300 feet, but boats are covering a lot of ground hitting spots from the 44 to the 54 line. The rockfish action has been good at the Cape, but not quite as good as it can be. Boats are still getting limits of rockfish and lingcod and there’s a real good variety. We’ve been getting 10 to 12 different species each trip. The ocean doesn’t look very good for the next few days, it could be early next week before we get back out.”

Shelter Cove
Shelter Cove is producing quality limits of rockfish and a few halibut as well. Jake Mitchell of Sea Hawk Sport Fishing has been bouncing around targeting both species with some good success. He said, “We fished rockfish and lingcod at the Hat on Wednesday with a light load. It was very slow but we got our limits by days end. Thursday we fished Rodgers Break for rockfish and lings and had limits by noon of a really good grade. We fished Gorda for rockfish Friday and ended up just shy of limits when the wind forced us in. On Saturday and Tuesday, we fished Gorda for rockfish/halibut combos. We got two nice halibut and limits of rockfish Saturday and three halibut and a few dozen rockfish on Tuesday.”
Salmon season will re-open on Saturday and according to Mitchell, there aren’t any consistent areas holding bait right now. “We’ll probably have to go look around on Saturday. The canyon looked good last week, but not so much the last couple days. The Whistle is always a good place to start.”

Trinidad
Halibut fishing has been pretty good this past week according to Curt Wilson of Wind Rose Charters out of Trinidad. He said, “There isn’t a ton of effort, but a few are being caught. There was a 65-pounder caught on Tuesday. Most of the boats are going straight out in 200 to 300 feet of water. The rockfish bite has been wide-open. Flat Iron has been loaded with black rockfish and there’s been a solid lingcod bite at Wedding Rock. There’s lots of shorts in the mix, which is good for the future. There’s some really promising signs for salmon as well just south in 20 to 40 fathoms,” Wilson added.

Crescent City
Chris Hegnes of Crescent City’s Englund Marine reports the water has finally cleared up and the rockfish are biting. “I fished the Sisters on Sunday and it was really good. We found some good quality blacks and there were quite a few lings around as well. There hasn’t been much effort for halibut, one of the charters had three last week and that’s all I’ve heard of,” added Hegnes.

Brookings
The ocean out of Brookings has been exceptional for rockfish, with large fish splashing at the surface eating crab spawn reports Martin. He said, “The topwater action has been wide open near Bird Island and Twin Rocks. The lingcod fishing also is good, although this weekend’s forecast looks windy. A few halibut also are being caught.”

Lower Rogue River
“The Rogue River has been slow for springers, with just a handful of fish a day being caught out of all the boats,” said Martin. “This week’s rain could draw in more fish.”

Trinity flows on the rise again
Flows from Lewiston Dam to the Trinity River are increasing for a second spring peak flow. The first peak flow in April was delayed due to an oil leak at the Trinity Power Plant. Water that was held back is now scheduled to be released as part of the second peak.

As of Wednesday May 15, released flows were at 2,600 cfs and were slated to increase every couple of hours until it reaches 9,000 cfs on Saturday, May 18. A slow decrease will follow. For up-to-date flows, visit here. 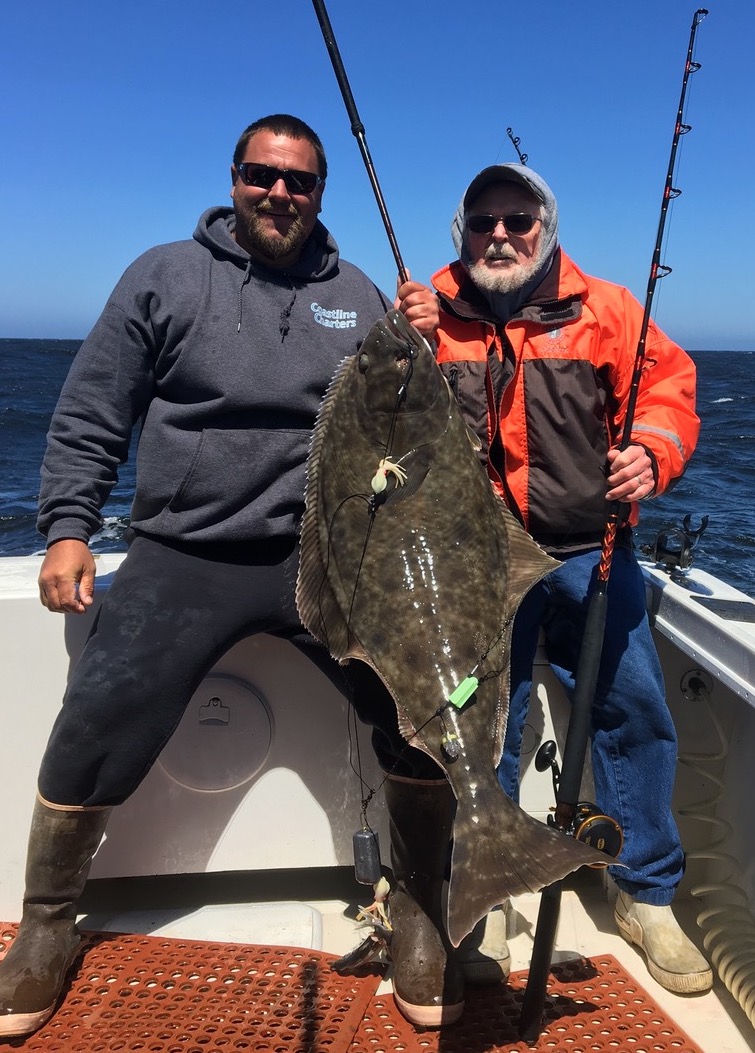 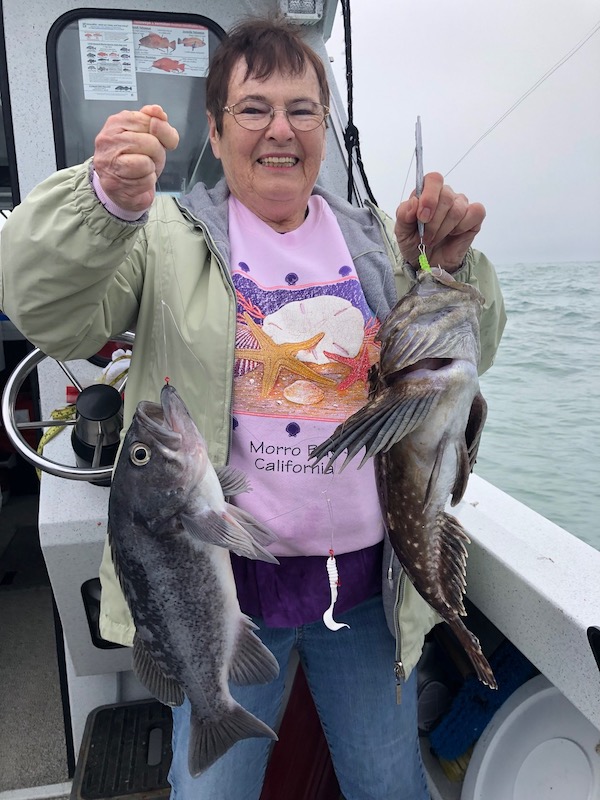 4-25-2019
Next Wednesday kicks off another ocean sport fishing season on the North Coast as both rockfish and Pacific halibut are...... Read More