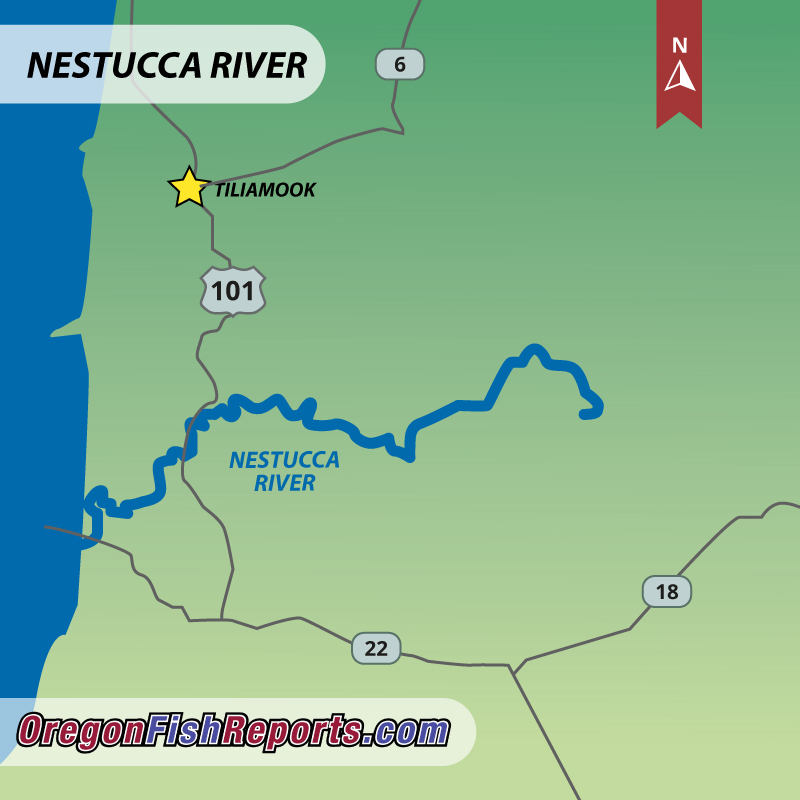 The Nestucca River is one of the North Coast most popular winter steelhead rivers and gets one of our largest hatchery releases. Hatchery winter steelhead on the Nestucca are from wild broodstock; as such they tend to mimic wild steelhead timing and the run really gets going in mid-December.

It is still early but we are getting reports of both hatchery and wild (catch-and-release only for wilds) being caught. The Nestucca blew out last weekend but has dropped into prime shape and should fish throughout the week.

River levels and predictions for the Nestucca are available here.

REMINDER: Elk Creek is the deadline for all fishing (trout and steelhead) on the Upper Nestucca, and it is closed to all fishing upstream of that point.

Three Rivers should be getting some hatchery winter steelhead back after last weekend’s rain. It’s still early for Three Rivers hatchery steelhead, so numbers will be a little low, but there should be some fish available.

There are no hatchery steelhead releases on the Little Nestucca River, so it is mostly a catch-and-release fishery for wild steelhead. It’s early, but there are probably a few fish around.

Clackamas River: Currently the river is on a hard drop and will soon be low and clear
Sandy River: Coho continue to trickle through the Sandy
Santiam River ( North Fork) : Flows will be in good shape this week with the expected dry weather
Santiam River (South Fork): Dry conditions expected this week these flows should remain consistent
Walter Wirth Lake: Stocked around Thanksgiving
Alsea River: Winter steelhead are starting to show up in the Alsea
Kilchis River: Should be some steelhead in the system alread
Miami River: Miami River Report
Necanicum River: Should be plenty of fish around
Nehalem River: Nehalem River fishing report
North Fork Nehalem River: Winter steelhead fishing has been fair to good