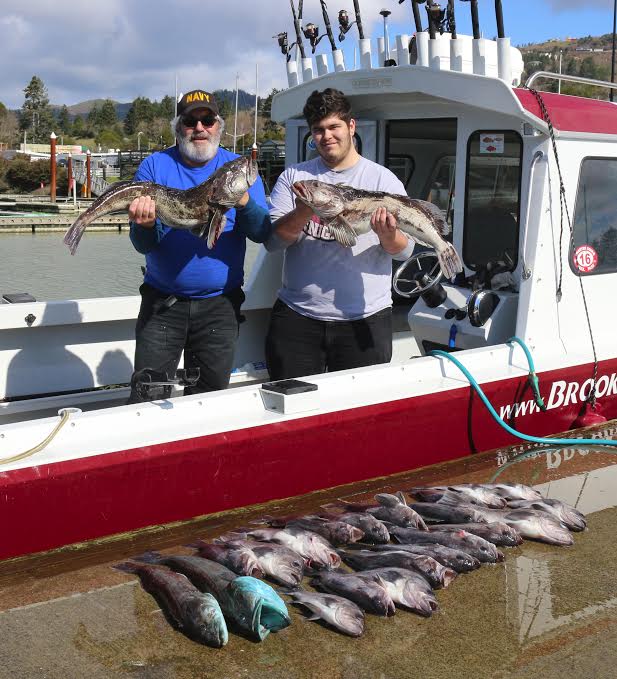 Rich Signorello and his son Matthew from Sacramento fished with Andy Martin of Wild Rivers Fishing last week and caught limits of black rockfish as well as some hefty lingcod while fishing in the ocean out of the Port of Brookings Harbor. Photos by Larry

And they haven't done all that bad over the last quarter century accomplishing that goal either, especially when you look at the statistics given in the 2016 Hatchery and Genetic Management Plan for Chetco Winter Steelhead.

In the last several years, ODFW staff, fishing guides and fishermen from the bank collect wild and hatchery Chetco River winter steelhead by hook and line.  The economic approach is that ODFW doesn't have the budget anymore to hire staff to use tangle nets to take their broodstock.

This biter/non-biter theory has been shuffled through the decks for quite a number of years now, with some biologists saying with conviction that the tendency to be an aggressive-biting steelhead is written in a fish's DNA. It's the old biters-beget-biters theory.

Although this supposed genetic predisposition of certain steelhead to bite more robustly has yet to be proven through peer-reviewed studies in the Archives of Steelheadology, make no mistake that anglers want to fish for steelhead that bite without reservation and lack hesitation.

Which brings us around full circle to the amount of steelhead that are required for biologists to artificially spawn 50,000 steelhead eggs, which are then grown to smolt size before they are released.  The question is, does it really take 120 fish (60 males and 60 females) to spawn 50,000 smolts?

The answer is that it all depends on the health of the fish that have to be held in Elk River Hatchery's raceways until they are ripe and ready for spawning.

If steelhead are not as healthy as they could be, or their bodies are covered with net marks and seal bites, it only stands to reason that these scars could conceivably become a source of infection or disease, which could understandably be transferred through the water in the raceways to their offspring (if the adults even survive).  So it is totally comprehensible that a lesser amount of extremely-healthy steelhead adults should produce more progeny.

"I've taken 74 steelhead to Elk River Hatchery this season," said ODFW biologist Damien Hawley-Jones from the Chetco Angler-Caught Broodstock Project on Wednesday.  "The bank anglers have provided a ton of fish when the opportunity is there for them, and I know that when boats have been able to fish for a couple of days, donations have been good from that end as well."

And ask any plunker who has contributed to the aforementioned project and he or she will tell you that Hawley-Jones has only been accepting fish that have not been seal bit and are in extremely-healthy condition.  This fact will push the Chetco to their goal of 50,000 winter steelhead smolts.

"The goal is to get about a hundred fish," said district fisheries biologist Todd Confer. "But with that being said, we've done real well keeping those fish alive up at the hatchery this year, so we should be able to make production with what we've got. This year they're staying alive real well and we haven't lost any steelhead due to pre-spawning mortality."

When I was on the Chetco on Thursday, I saw 3 steelhead hooked and landed by plunkers in a relatively short period of time, and as I exited the bar, another angler had just hooked up with a line-peeling steelie.

So fellow steelheaders, do not give up on the end of February and March. There should still be plenty of heavy metalheads shooting through the travel lanes and current seams.

In addition, ocean fishing for lingcod and rockfish has been wide open for anglers hitting the days when the ocean has laid down like a piece of glass. With these cold-winter days, you practically have the whole ocean to yourself.

"We limited out on rockfish around Bird Island and we're headed to Twin Rocks to get our lings," said Andy Martin of Wild Rivers Fishing on Thursday.  "The rockfish are all full of baitfish right now and the baitfish are good size - between 5 and 6 inches!"

Martin found his rockfish in about 120-foot depths off of Bird Island and he also caught them in shallower-water venues as well.  He promptly releases any rockfish displaying signs of barotrauma by using a SeaQualizer descending device.

It's also no coincidence that the river fishing usually tends to get better when the ocean lays down, with more steelhead tending to cross a calmer, less sandy bar. 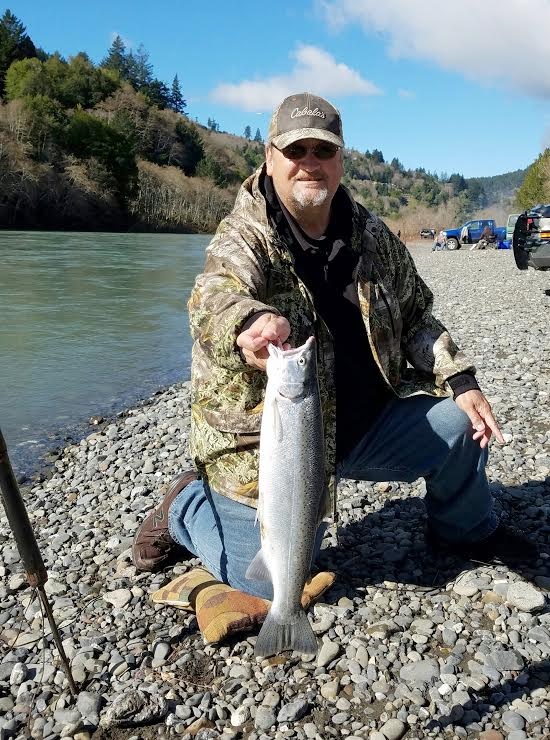 Dave Howland from Brookings, Oregon was one of the many plunkers who caught steelhead on Spin-N-Glos on the Chetco last week when the river was was experiencing high water. 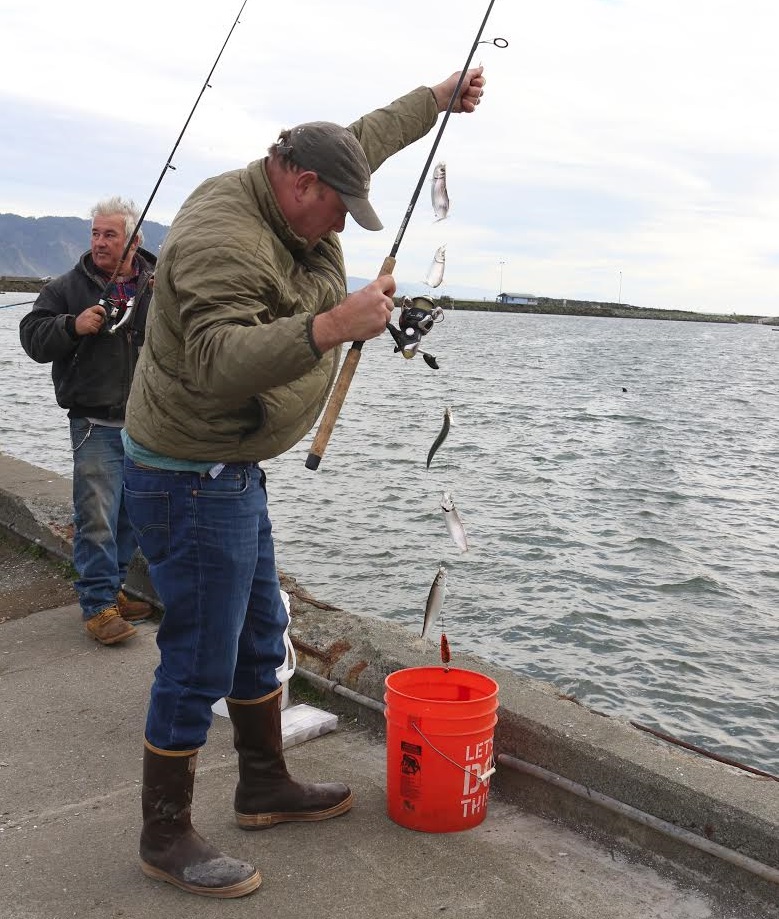 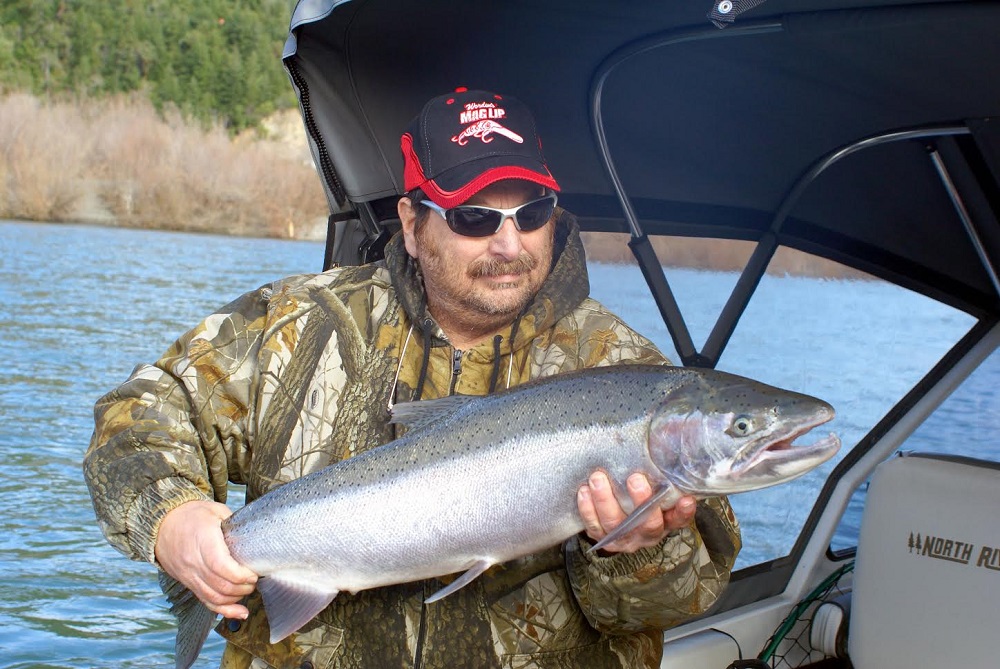 2-11-2017
With over one week of fishless days due to high, turbid and muddy water, fishermen on the Chetco and lower...... Read More