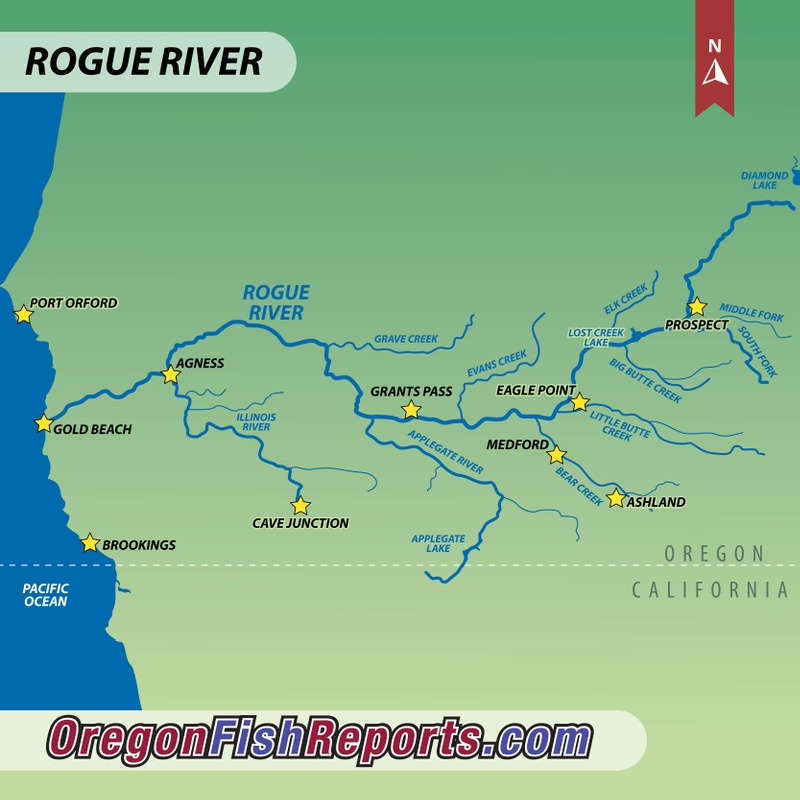 Fishing is restricted to artificial flies and lures between the Shady Cove boat ramp and Fishers Ferry. Bait is allowed between Shady Cove and Cole Rivers Hatchery. There is good public access at McGregor Park, Casey Park, and Rogue Elk where bait is allowed. Most floats in the upper Rogue have been from the Hatchery or Rogue Elk downstream to Shady Cove. Dodge Bridge to Touvelle is an excellent float but anglers should be aware that they will encounter Rattlesnake Rapids. If you are not ready for Rattlesnake, many floats will start at the ODFW Modoc Access Site and float to Touvelle or Fishers Ferry.

Anglers are still picking up the sporadic Coho from the hatchery to Rogue Elk. There’s still probably 10-20 percent of the summer steelhead run expected to enter the Hatchery. Try fishing spinners or jigs as slow as possible in the deeper holes. The Coho run is just about done.

The upper Rogue water levels don’t typically fluctuate dramatically upstream of Elk Creek, but the rain forecasted throughout the week should get fish moving. Water color should also improve.

As of Dec. 18, 2,445 summer steelhead had entered Cole Rivers Hatchery, with 240 new for the week. For the week, 40 additional coho entered, bringing the total to 474 for the year. Anglers should be aware of their identification. Only hatchery coho may be retained, so when in doubt, release the fish. Find updated fish counts at Cole Rivers Hatchery here.

12-15-2018
Oregon Department of Fish and Wildlife hatchery staff are reporting an unusual level of loss among spring Chinook eggs and...... Read More